Need a fun way to incorporate some physical activity in your weather & earth systems lessons? The Reasons of the Seasons created by M. J. Krech gives your students an engaging and active way to learn about the earth’s seasons.

Students will physically demonstrate the tilt and orbit of the earth in order to understand the conditions that create our seasons on earth.

A common misconception regarding the seasons is that the summer season is caused when the earth moves closer to the sun, and winter is caused when the earth moves farther away. In fact, we are physically closer to the sun during the winter months of the year. Earth does not orbit in a perfect circle, but rather in an elliptical, oval shape. The earth’s closest distance from the sun, known as perihelion, occurs around January 3. The farthest point we reach from the sun, known as aphelion, occurs around July 4. 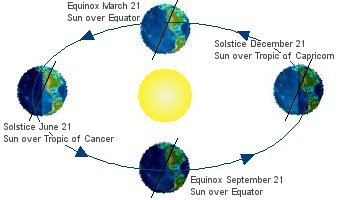 M. J. Krech created a great handout that you can use in your own classroom at The Reasons for the Seasons. This handout includes four major related activities. For these activities, you will need the following:

Your first step should be to find a large enough indoor space for groups to move around comfortably. Here are the steps for the four activities provided by the author. I will provide the basic instructions to give you an idea of what the activity entails. You should refer to the PDF for more detailed instructions.

After completion of the first three activities, instruct your students to answer these questions individually or as a group:

I’ve had the opportunity to implement this activity with my own students. My students enjoyed the opportunity to get up and move around and they showed a lot of enthusiasm for this particular activity. I find that kinetic activities are a great way to reinforce concepts or help those learners who learn by doing rather than by watching or listening.

MS-ESS1-1 Earth’s Place in the Universe

ESS1.A: The Universe and Its Stars

ESS1.B: Earth and the Solar System