As a result of increasing levels of carbon dioxide in the atmosphere, a great deal of it is being absorbed by the world’s oceans. The world’s oceans absorb a lot of the CO2 emissions produced and creates carbonic acid. This leads to the acidification of ocean waters that has a negative impact on marine ecosystems.

Guide your students through this hands-on demonstration that will allow them to understand one of the impacts that global climate change has on ocean life. Students will use dry ice and bromothymol blue indicator solution to visualize the effect that carbonic acid has on the ocean.

This activity comes from NOAA and they provided a great PDF activity guide that you can use with your students.

Introduction to the Activity

In this activity, students will explore the effect that global carbon emissions have on the levels of ocean acidification. This effect will be explored with dry ice and bromothymol blue indicator solution. Dry ice is used to represent the oceans with increased acidification because of high levels of carbon dioxide. Students will use drinking straws to create bubbles in a solution.

This activity can be extended with the use of a pH meter. Use a pH meter to measure pH levels during the activity to further see higher levels of acidity throughout the demonstrations. I think it’s a great way for your students to visually see the impact that higher levels of carbon dioxide have on ocean acidity.

Ocean acidification refers to the decrease in the pH of the world’s oceans as a result of increased levels of carbon dioxide in the atmosphere. Oceans absorb much of the carbon dioxide emitted into the atmosphere, and as a result, acidity levels are rising in marine ecosystems. While scientists are unsure of the long-term consequences of higher acidity in ocean ecosystems, some of these negative effects are already starting to take place.

Increased ocean acidity is already starting to have an impact on ocean life. One of the more visible examples is with coral reefs. Higher acidity has already begun to affect the ability of coral reefs to grow and build their homes. Other animals such as oysters, mussels, urchins, and starfish will have an increased difficulty building their shells, which leads to a higher chance of being crushed or eaten. Different fish species will have a harder time adapting to higher acidity levels that will impact their health and bodily functioning.

In order to study and understand the effects of high acidity levels in the oceans, scientists look to the past and present to find clues to determine long-term effects. Geologists can study soil and rock samples from different layers in the Earth’s crust in order to study the effects of high levels of carbon dioxide in the atmosphere. Scientists have studied a period known as the Paleocene-Eocene Thermal Maximum, when massive amounts of carbon dioxide were released around 55.8 million years ago. Scientists are also conducting controlled laboratory experiments in order to study this phenomenon. Some scientists are also conducting field tests by pumping large test tubes over 6–feet deep in order to study how zooplankton and phytoplankton are adapting to higher levels of acidity. 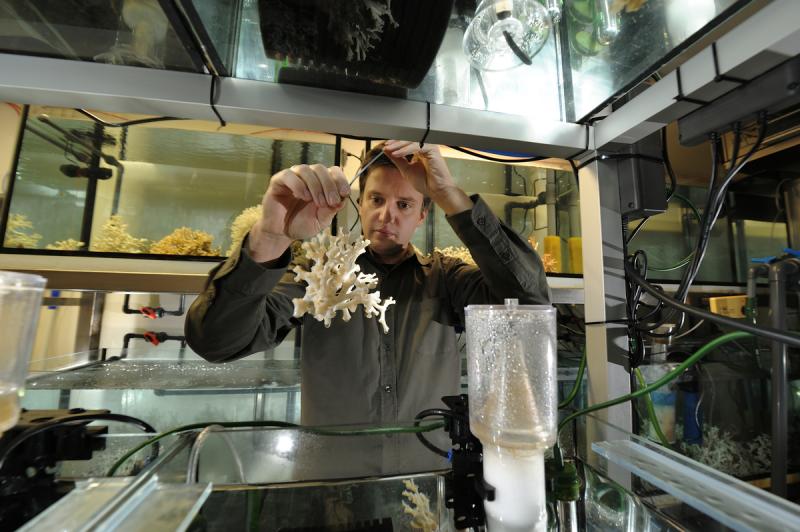 Ask questions to clarify evidence of the factors that have caused the rise in global temperatures over the past century.